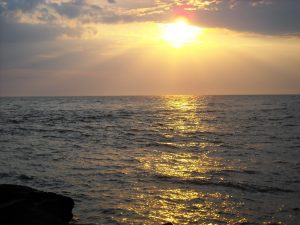 True Christianity is focused on the Lord Jesus Christ. It proclaims the person of Christ, because salvation comes through knowing Christ and so being united to him by faith. The great call of the gospel is believe on the Lord Jesus Christ and you will be saved. True Christianity proclaims Christ’s saving acts that were performed in space/time history. On a literal twenty-four day in the first century, Jesus actually died outside the real city of Jerusalem in Palestine. And three days later he actually rose from the dead. It also proclaims Christ’s word and the word about Christ in the Holy Scriptures. The Lord tells us the meaning of what he did.

Without interpretation, historical events can be meaningless or even misleading. For example, imagine viewing pictures of two groups of men. Both groups appear to be very happy and pleased. Obviously something exciting has occurred as they congratulate a man in the center of the group. You can sense their pride of accomplishment, and perhaps you even might want to smile as you view their happiness. Surely something good has been accomplished for mankind! Then someone interprets both events. The man in the center of the first group is Alexander Graham Bell, but the man in the center of the second group is Adolph Hitler. The interpretation radically alters one’s view of the second group!

It is a fact of history that the tomb of Jesus is empty. Even the most violently determined opponents of Christ and Christianity in the first century could not dispute that fact. But what is the significance or importance of Christ’s resurrection? Let us think about this together. We must start here: The resurrection of Jesus Christ is the basis for justification—for being declared right with God.

Christ’s resurrection is the fulfillment of Christ’s crucifixion.

We should think of Christ’s resurrection as the greatest triumph of human history. This day should fill our hearts with inexpressible and glorious joy!

The resurrection of Christ is God’s public declaration.

The resurrection of Jesus Christ is proof that something of immense significance has happened. It is like the great day when a large debt is paid and you hold the title to the property free and clear. But in this case it is much better, because in Christ you have eternal life and glory! So then, let us rejoice greatly, knowing that God has accepted every believer in his Risen Son.