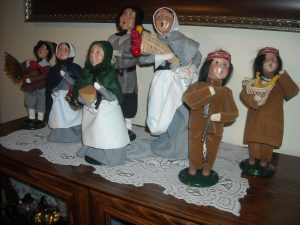 November is the month of Thanksgiving, although I must admit that in a store yesterday, November 1, I heard Christmas music. Other customers remarked that it was too early. I agree. Why not some Thanksgiving music? But apart from hymns, Thanksgiving songs are rare. I once bought an album of “99 Thanksgiving Classics” to have playing in the background on Thanksgiving Day. Almost all were classical pieces; none were hymns. I could not figure out the connection with Thanksgiving, except that they were nice songs.

This month we should think about the opportunity to express our worship and praise to God. Jehoshaphat and his people found it in an amazing act of deliverance for his people.

It sprang from the obedience of faith (20:20-21); prompt obedience. They did what the Lord told them to do “early in the morning”. In this way, they imitated the obedient faith of Abraham (Genesis 22:3) when he took Isaac to the mountain. The Lord responded to his faith by providing a lamb in place of Isaac. God sets forth the examples of believing men and women in his word, in order that we might learn from their walk of faith. For example, read and meditate on Hebrews 11; think about the difficulties they faced; observe how they believed and obeyed.

The point is that they did not delay or procrastinate to obey the Lord. They did not wait till they had finished their “to do” list. They did not allow anything to distract them from believing and acting in conformity with God’s message to them.

Jehoshaphat encouraged his people to believe (20:20). He urged them to have faith in the Lord. Jehoshaphat pointed them to God who is able to save or rescue people. Let us clearly understand that walking out to the wilderness without weapons to face a vast army was foolishness, unless God could save. God was not calling them to a leap of faith, but to total reliance on his mighty power. Finally, be strong in the Lord and in his mighty power (Ephesians 6:10 NIV).

Jehoshaphat also urged them to have faith in the Lord’s prophets. Jehoshaphat pointed them to God’s message given through his prophets like Jahaziel (20:14-17). I repeat. Let us clearly understand that walking out to the wilderness to face a vast army without a message to do so was foolishness, unless God had spoken. The Lord does not tell us to invent ways that we suppose will bring salvation. He wants us to trust his way. Paul acted on God’s way during a difficult time of physical persecution. Though he suffered, he learned that God saved people through the gospel. For I am not ashamed of the gospel, because it is the power of God that brings salvation to everyone who believes: first to the Jew, then to the Gentile. For in the gospel the righteousness of God is revealed—a righteousness that is by faith from first to last, just as it is written: “The righteous will live by faith (Romans 1:16-17 NIV). We need to relearn his confidence in our times.

An army of praise formed. After encouraging the people, Jehoshaphat decided to make the most of God’s promise by appointing men to sing to the Lord at the head of his army. This was acting in faith on God’s promise of victory. While the exact translation for the phrase “for the splendor of his holiness” is unclear, what is clear is the recognition of God’s holiness. God is over all, doing what is right, pursuing his glory as God. When you know that the Holy God is with you, you can sing!

Why do people sing to the Lord? We sing to the Lord when we are convinced that his promises are true. God has made his promises of eternal salvation true to us in the Lord Jesus Christ. For no matter how many promises God has made, they are “Yes” in Christ. And so through him the “Amen” is spoken by us to the glory of God. (2 Corinthians 1:20). Only when you know that your sins are forgiven and God has accepted you are you truly able to rejoice, give thanks, and sing! Can you rejoice in the Lord’s enduring love? Our goal is for you to become a person who rejoices in the Lord. Why should anyone rejoice in the Lord Jesus? We should rejoice because he has defeated our worst enemies: sin, Satan and death! How did this happen? It happened when he died on the cross for sinners and rose again the third day. Believe in him, and he will give you the free gift of eternal life.