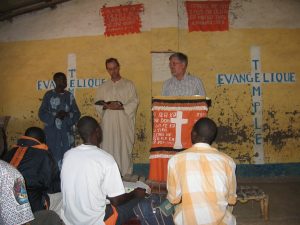 As you might know, I am a pro football fan, especially of the Eagles. I also root for the Browns, since I grew up near Cleveland. I like to watch the games, but I rarely have time or opportunity to watch a whole game, especially live. NFL Network has a handy program series in which they replay the best games of the previous week sometimes with all the extraneous stuff cut out. But I have noticed an utterly amazing fact. Regardless of how many times they replay the games, the team that won on Sunday still wins throughout the week! Every touchdown or fumble recurs in the same way with the same result. So, though it is being replayed, the game always ends with the same score.

In life, there is no replay. You live, and you can’t go back and relive the same experience, and you surely can’t change the past. It’s just there, frozen in history. Yet its effects continue. This can be either a cause for sorrow or joy. Although the past can never change, God is able in Christ to make changes in us for his glory and our good. Though I don’t know what sorrows and regrets you might be carrying around today, I do know that the Lord’s power and love can rebuild your life, to make it shine brightly for his praise. Let’s learn about this from Jehoshaphat, as we continue to consider the subject of “When Desires Clash”. He couldn’t hit the replay button, so that he could make better choices. But God was able to give him something different.

So, Jehoshaphat received correction (19:1-3). That does not sound very dramatic. It doesn’t sound like exciting stuff for the Christian media to trumpet. But the correction of his people is important to the Lord God. God disciplines us for our good, in order that we may share in his holiness (Hebrews 12:10b NIV). It came after he had returned safely from the battle, in which God rescued him from death (cf. 18:30-32). Jehoshaphat had escaped from human hands, but he was still in God’s hands. The dangerous events of life can strip away the illusion of being in control. Now God will confront Jehoshaphat about his control over his life. Let us stop and think about what the Lord is doing in our lives.

The correction came through a seer or prophet, Jehu the son of Hanani. We first read of Jehu the prophet in 1 Kings 16:1-7, when God spoke to Baasha, king of Israel, about 886 BC. This incident occurs during 853 BC, about thirty-one years later. In other words, Jehu was an older man at this point. When Elijah complained to the Lord, “I’m the only one left,” he forgot about other good men like Jehu. The Lord sent Jehu into a doubtful situation, from a human point of view. Jehoshaphat had days before failed to listen to Micaiah, another of the Lord’s prophets, and his father Asa had put this same Jehu into prison, because Asa had not liked the message from the Lord that Jehu had delivered (16:7-10).

My friends, Jehu was just as much the Lord’s prophet as Elijah and Micaiah, but Jehu and Micaiah both spent time in prison for their faithfulness to the Lord, while the Lord delivered Elijah in amazing ways. All three lived at the same time in history, and served the same Lord. Not everyone gets to stop rain from falling or to call fire down heaven. Jehu was faithful to the Lord over a long time period, yet, unlike Elijah, we don’t sing, “These are the days of old Jehu, declaring the word of the Lord.” Jehu declared God’s word, and we don’t sing about him. Your service for the Lord might go unnoticed and be very plain. Remember that you are serving the Lord, as he wills.

Let us build our theology properly. Some read the life of Elijah and decide to rewrite their systematic theology to include something about “power ministries” or whatever words they use. But exegetical and biblical theology must inform and develop our systematic theology to keep it from going astray. Based on our time period, it would be just as plausible to over-concentrate on Jehu and Micaiah and write about “suffering ministries”. We have too many trashy books following that kind of selective methodology today.

Listening to the message of the Bible can require hard work. We must know the meaning of words and the context of verses in the Biblical narrative. However, this effort yields spiritual benefits when the Holy Spirit applies what we have learned to our hearts. For example, we can accept joyfully our place in God’s mission in Christ. This gives us new, godly desires to serve God and others, instead of the old desires of wondering “how can I have a happy life now.” God does not raise up many to serve like Elijah. Most of the time he will use people like Micaiah and Jehu, invisible to the watching world, but very precious to God and loved by him.