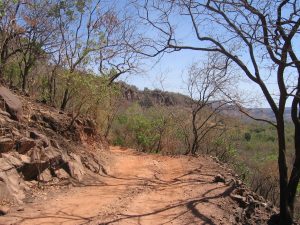 Recently, we have encountered many “road closed” signs in our area. If we’re honest, we all feel ambivalent about these signs. On the one hand, we want the roads we travel to be in good repair. Admittedly, we even complain when they are not! On the other hand, a closed road can be an inconvenience, at times involving frustrating, time-consuming detours. And so we complain about the detours. Recently, the road we live off of was being repaired, which sent us onto detours. I reminded myself that I had very much desired to have the road fixed. The potholes had to go!

God our Father can wisely put “road closed” signs in our paths to develop godly character in us and/or to prevent sinful activity by us. He metaphorically puts roadblocks in our ways in order to help us to live with his ways and to speak with his tone. So, the Lord gave a final warning to both kings, Jehoshaphat and Ahab.

Micaiah the prophet entered an unpleasant situation with the deck stacked against him (18:9-15). God calls his people to walk through fiery trials, but praise his name, he walks through them with us (Isaiah 43:2-3). When nobody likes you, you might be in the exact place the Lord wants you to be for his glory.

My friends, be aware that unbelievers will try to gang up on you. But keep a firm hold on the word of the Lord.

Micaiah responded with two prophetic messages (18:16-27). The first pronounced doom on Ahab; if he went to war at Ramoth Gilead, he would surely die there. Notice that Ahab did not repent because of this message; he merely complained. Having “roast preacher” for Sunday dinner can be fatal; we’re not a good meal.

The second explained why the four hundred prophets were giving their message. The Lord had sent a lying spirit to entice Ahab to destruction. Satan is a liar and a murderer (John 8:44). His lies are easy to listen to. But the devil pats you on the back with a knife in his hand. Satan says, “Don’t listen to that crazy preacher! He doesn’t want you to have fun, because he doesn’t like you. Listen to me; I want you to succeed; really, I do. In fact, I want you to be like God. Go ahead; prove yourself. Make your own choices! Show everyone that you’re a man (or woman). You don’t need to listen to God. Go ahead; reach for the stars! You are the master of your fate and the captain of your soul. You can have anything you want! Visualize it and its yours. Take the fruit off that tree. You won’t really die.”

Now surely, Jehoshaphat listened to the Lord and abandoned his alliance with Ahab, right? He had heard the word from the Lord that he claimed to long for! So then he would listen to it, believe and obey, wouldn’t he? My brothers and sisters, this is where we should weep! If it were only so simple: share God’s word and people will change. Absolutely not! Apart from grace, no sinner, saved or unsaved, is able to change. Jesus said, “Without me you can do nothing!”

God brought the consequences (18:28-34). You can choose unbelief and disobedience, but you cannot choose the consequences of your choice. God controls consequences. The Lord rescued Jehoshaphat, though he permitted him to suffer the scare of his life. When Jehoshaphat chose to go into battle, he found himself in deadly peril. He only escaped with his life, because the Lord helped him and drew the enemy away. But the Lord refused to help Ahab. Someone drew his bow at random, but God’s judgment guided the arrow to its fatal mark.

Do not play games with God! He will always win and you will always lose. Listen to the word of the Lord. Seek the Lord while he may be found; call upon him while he is near; let the wicked forsake his way, and the unrighteous man his thoughts; let him return to the Lord, that he may have compassion on him, and to our God, for he will abundantly pardon (Isaiah 55:6-7). And remember: wrong desires wreak havoc, with our character and our lives.