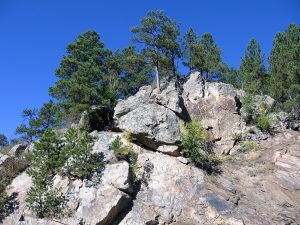 David the king was a man of worship. He loved to communicate with his God, the true and living God. He prayed, he praised. He wept, rejoiced. He expressed anger, yet he again and again found rest in the Lord. David was glad to share his life with God, regardless of his worldly circumstances. Though he became king, he was often a fugitive from his enemies. We read of one of these times in the third psalm. The Psalms are songs, songs with many purposes. One purpose is to worship God for his glorious true story; another is to teach others about our place in God’s story.

Life hurts sometimes. David was not ashamed to write a song about the problems and pain God’s dearly loved people experience. David did not regard such happenings as a reason to doubt the Lord and to turn away from him. Instead, he wisely found that he could rely upon the God who is over all, even when it was easier to fear than to trust and worship.

David began this song by stating his situation (3:1-2). This is not to inform the all-knowing God about his problems. The Lord fully comprehends our needs before we state them. This is one way people share their lives with others. David talked to his God about what was happening. In the song, it lets others know of why he needed to turned to the all-powerful God. David had many enemies, and they assumed that they had David trapped. What made this especially painful for David was that the leader of his enemies was his own son, Absalom.

In this song David sings about his hope or confident expectation. It was that the Lord would be his shield (3:3). Since David was a warrior, he valued shields as a means of protection. We might think more about the airbags in our cars. He viewed the Lord as his protection in every direction: “you are a shield around me”. Regardless of the ways his many enemies planned to attack him, David was confident that the Lord was sufficient to guard him. God was the one who had lifted him up to be king, and so he was “safe and secure from all alarms”. Knowing God’s all-sufficiency produced four beneficial consequences in David’s heart and relationship with God. He wrote that we might sing about these benefits with him.

Where do you run in your troubles? I hope you turn to the true and living God, who is able to rescue you. Where do you run after the Lord rescues you? Do you focus on your remaining or new difficulties? Or are you ready to tell others of the comfort with which your Father in heaven has comforted you (2 Corinthians 1)?