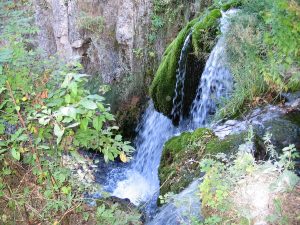 Once in a while, you might see a movie or read a novel that presents both sides of a story. The main characters function as both protagonists and antagonists. An example would be the movie Gettysburg, which attempts to tell the story of the battle of Gettysburg from both the perspective of the Union and the Confederates. In this section, we encounter something similar occurring. As we see Ruth take center stage, we see two sides of the story. On one side we find Ruth, her significant choices, and random or chance events. But on the other side the story is about the invisible but true God, directing her life so that it moves beyond coincidences.

Ruth exercised a bold initiative; she decided to act. Ruth knew that having a house and a table is insufficient. They needed bread on the table, if they were going to survive. She was not afraid to work for that goal. The Bible teaches that we both pray for God to supply our food (Matthew 6:11) and actively fulfill our responsibility to work for it (2 Thessalonians 3:10). Ruth overcame the temptation to laziness and the apparent depression of her mother-in-law. When Naomi agreed to Ruth’s action, she gave a two-word answer in Hebrew. So then Naomi was not in a good emotional or spiritual condition. If you are in a depressed condition, you need to return to active service for Jesus. To do this, look to his cross and see a better covenant made with you by his blood. The Lord is on your side and he is committed to help you, regardless of your present circumstances.

Ruth used a provision in God’s old covenant law for her good (Leviticus 19:9-10; 23:22; Deuteronomy 24:19-22).  To glean means to gather or collect. God allowed those who were in need in the specified circumstances to provide food for themselves from the property of others, since the land belonged to God ultimately. We should see more than the law; we should see the kindness of the Lord who gave the law to his people. God’s commands flow out of his nature, all revealing his glory as God in some way.

We need to see all that we have as coming from the kindness of our Father in heaven. Whatever we give is his anyway, and by giving we reflect God’s kindness. Observe carefully that Ruth was not guided to glean by some nighttime vision or dream, by hearing voices from heaven, or by an angelic escort. She simply walked according to the word of truth, the Bible.

Ruth took a risk. There was danger because of her ethnicity. People have many prejudices in regard to people of other ethnic groups. Many of these arise from differences in skin color, language, customs, and religion. Though the Lord had given the law of gleaning to provide for the aliens in Israel, not everyone would be willing to obey God’s law. The law of God reflected God’s character and will, but it did not achieve it. Grace comes through the gospel, not the law.

There was danger because of her gender. The time of the judges (cf. 1:1) was marked by open sexual immorality, like our time. (Sexual immorality is always a human problem in this world, cf. Mark 7:21; Romans 1:24-27.) Without a strong central government committed to God’s law covenant, outward expression of the heart’s sexual immorality was not hindered as it should have been. It could have been risky for a woman to go out to the fields alone. We will notice more about this in the next section. Israel had become more like the nations that she was to be separated from. Having forsaken God and the good news of Jesus, our nation will become increasingly sexually immoral and violent, which is the companion of sexual immorality. (Read Romans 1:18-32.)

There was also a risk because of her limited knowledge. All people face this in various ways and degrees. Ruth was not sure about who would show favor to her. Would they treat her as a needy person or as an unwelcome, troublesome foreigner? She simply didn’t know. But she took the risk. God expects us to live by faith according to the Scriptures. In his providence, Ruth was a widow, an alien, and poor. In his covenant law, he had provided for her provision in the law about gleaning. By faith she had to act on God’s revealed will and to trust God to provide.

Ruth’s risk was rewarded by God (2:3). Here we see the hand of the invisible God silently at work. From the human perspective, Ruth simply made her choices. “Let’s see; that looks like a nice field and the workers seem happy. That might mean that the owner is generous. So, I’ll try my luck there.” But Ruth might not have even thought that much. The Hebrew text literally reads, “Her chance chanced upon.” She might have simply wandered into the field with a sigh and a shrug of her shoulders and started to glean.

However, what people call chance or luck is not simple random occurrence. Instead, this is God’s sovereign providence. God guided her steps to her destiny that he appointed for her (Proverbs 16:9). God directed her steps, so that she walks seemingly “by chance” into the fields of Boaz.

My whole life has been shaped by various chance happenings, like a computer picking my college roommates for my freshman year, randomly sitting next to someone in my first class at a new college, and a man suddenly recalling at the right moment that he had my phone number on a scrap of paper in his Bible. Those are three examples from what I do know, and God alone knows in how many other ways he has guided my life through “chance” happenings.

The life of faith is an adventure. It’s exciting to think of what God might do; that is, if you’re trusting him! Are you?