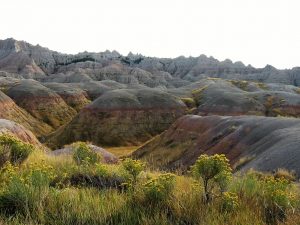 In this series we worship the Lord as we listen to his word to us in the book of Ruth. The book is one of the festival scrolls of the Jews. We call it the “scroll of kindness”. In our current text from Ruth, we encounter the idea of kindness for the first time. The Lord speaks to us about kindness, and so may his kindness toward people and our kindness to one another fill our lives.

In the opening section of this story, we have read of the tragic events that came into Naomi’s life. A famine struck her native land, and her husband Elimelech decided to take Naomi and their two sons to the foreign land of Moab, in order to attempt to provide for them. However, everything went wrong in Moab! First, Elimelech died. Next, Naomi’s sons married Moabite women, which because of the law and given the history of Israel and Moab was not a godly marital decision. And then, both of Naomi’s sons also died within ten years of arriving in Moab. So, Naomi was left with the triple of burden of being a widow, childless, and lacking any honorable means of financial support. Her condition appeared to be hopeless!

Many people, including religious or spiritual people, would simply collapse at the terrible blow that Naomi received. There are various ways this personal collapse can happen:

However, Naomi did not give into despair. She did not run from the true and living God in this desperate hour of her life. Instead, she ran toward God with continued belief in his rule over all things and with the deep pain that fills her life. So then, this is a helpful message from God for us to listen to in these uncertain, tragedy-filled days in which we live.

Let’s begin with a great idea. God’s grace is active at the darkest times (1:6a). The Lord took the initiative. The Lord continued to work out his plan, the story of his glory in Jesus Christ. We must keep this in mind, or else we reduce the narrative parts of the Bible to mere moralistic lessons. Naomi’s problems and pain filled her life. But the account is in the Word, not merely to tell us about a woman who endured, and so somehow to inspire hope; instead, it tells how the living God took Naomi into his story as part of the path to Jesus the Messiah.

God set his plan in motion, before Naomi had any reason to hope. For years, she had not heard any hopeful news from her native land, Israel. But at the moment of her worst circumstances, God was already at work to change her life forever and to pursue the goal of his great story. At the loss of her sons, her thoughts were focused on her grief and needs. She had no idea that God was at that same time at work to help her.

She was still in Moab when good news came to her. The Lord did not wait until she was on the way back. No, he set in motion the process that would lead to her return to God and his people. Many times when we are flooded with sorrows and trials, we cannot see or fail to see how God is already at work for his glory and our good. This is part of our weakness as humans, but God knows our weaknesses and does what it takes to draw us to him or back to him. This is a good reason to worship the Lord!

God is in charge of providing food for his creatures (Psalm 145:15-16; cf. Matthew 6:11). Usually God uses what we call “natural means”, but he oversees the whole process and acts in positive or negative ways to give us food. Notice the worldview of the God’s word. It does not say things like, “the weather changed,” or “the raiders left”, or “there is an upturn in the economy”. Instead, the Holy Spirit emphasizes God’s activity. Here, God took note of the suffering of his people from the famine and he sent them bread. We need to restore a deliberate, conscious recognition of God’s care for his creatures. Food comes ultimately from God, not from the grocery store.

The person who believes in God will see God’s action in our present situation. Only if you see God at work now can you pray for his mercy for a recovery. “It is concentration on the Great Cause which teaches us to live by faith” (Atkinson). Look at each day as part of the process in which he acts toward the end of the story of his glory in Christ.