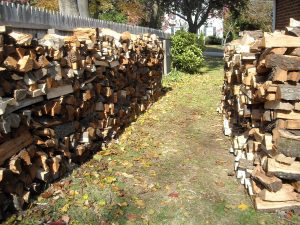 Asa’s early reign was a time of preparation. If we are wise, we prepare for the future. Early preparation is the best for we have time to adjust, to correct, or to repent of our plans entirely. For example, it’s better to buy a car when you are not pressured to make a purchase because the “old clunker” is in its last useful days. As I learned in years gone by, the time to get your wood cut, split, and stacked is in the summer and early fall, before you need it when cool days arrive.

Consider Asa’s sound ideas. He reasoned that they needed to protect and preserve what the Lord had given to them (14:7a). He saw their country, not as an item to be consumed, but as a trust to be guarded. This is forward thinking that is rarely considered in our time. There is more to human life than our brief time here and how many precious resources we can consume. If we are self-centered, we will only think about pursuing pleasure for ourselves, rather than considering how to build a strong future for others. While the world squanders its resources, the church has to think about generations still to come. Now assuredly we should be looking for the return of Jesus Christ. And many question, “Can things get any worse than they are now?” I’ve been in the ministry for over forty years and was a pastor for thirty-five years. I’ve heard that question for more than that time, back to the days of my childhood. Many back in the sixties and seventies were sure that things couldn’t get worse. But they have. Yes, look for the Lord’s return, but don’t waste your life idly looking into the sky (cf. Acts 1:8-11). We must use days of peace to make preparations for the future of God’s spiritual family. We must seek to build a godly heritage for those who will follow us, if the Lord does not return in our time.

Asa understood the principles of life for his old covenant nation. The old covenant was given with an “if” (Exodus 19:3-6). Israel’s life before God depended upon them seeking the Lord and walking in his ways. He pointed back to the reformation in worship that the Lord enabled him to accomplish (“because we have sought the Lord our God”, 14:7 NIV). Now they needed to improve the opportunities provided by that reformation.

Think of the early church in Acts. How did so few people become ready, strong and able by God’s grace to change the world? The Lord Jesus had built a strong core, and that small core group in turn strengthened others who became followers of Christ (Acts 2:42, 46). They were full of faith, wisdom, and the Holy Spirit (Acts 6:3, 5). Then they followed Christ’s plan, even when life got tough (Acts 8:4). All we need to do in our time is to prepare and live continually according to their example record in God’s word and invest time in prayer for the Spirit of the living God to act powerfully, very powerfully, through the Lord’s people.

The key to Asa’s actions is recorded in 15:7. And he said to Judah, “Let us build these cities and surround them with walls and towers, gates and bars. The land is still ours, because we have sought the Lord our God. We have sought him, and he has given us peace on every side.” So they built and prospered (ESV). He pointed them to the source of their security. Yes, they needed to do what was wise, but they realized that their greater hope was in the Lord God. He gave his people peace.