But where sin increased, grace increased all the more… (Romans 5:20 NIV).

Sin had greatly increased in Israel, and it seemed like there was no hope. The Lord, their covenant God, had sent his prophet Elijah to announce a horrible drought, which was one of the curses, if Israel disregarded God’s covenant with him. The sky above you will be bronze, and the earth beneath you iron. The Lord will turn the rain of your land into falling dust; it will descend on you from the sky until you are destroyed (Deuteronomy 28:23-24). Yet, at this terrible time, the Lord showed his grrace. We see three evidences of his grace.

First, God preserved Elijah for further service to him. God had fed him at the brook and at Zarephath. The Lord also kept Ahab and Jezebel from killing his prophet. He also had taught Elijah valuable lessons about faith that he needed to know in service to God. Elijah was now prepared for the coming contest of God versus Baal on Carmel.

Second, the Lord placed Obadiah in Ahab’s court to protect other of his prophets. When we think all is lost, we can fail to see faithful people whom the Lord has placed near us to help us. Consider Obadiah’s character. He was a godly man (18:3). Like Joseph, Nehemiah and Daniel, Obadiah was faithful to God in a pagan palace. “There is nothing wrong in a child of God holding a position of influence if he can do so without the sacrifice of principle” (Pink). The Lord often has his saints in unlikely places, as in Caesar’s household (Philippians 4:22). We can be in the world and not of the world. Obadiah was consistent over a long period of time, for he had worshipped God since his youth (18:12). I am glad to see girls and boys in attendance, when their parents gather to worship the Lord. It is good to begin to serve God when you are young. Don’t let sin ruin you for years! Seek the Lord before the chains of sin harden around you and your mind is polluted with a great deal of sin. Think also of Obadiah’s accomplishments (8:4, 13). He hid the prophets and provided for them. He had bold faith. We thank God for those who have risked their lives to protect God’s persecuted people.

Third, God purposed to send rain again on the land. This was an act of sovereign mercy, for the people still had not called on him in repentance for their idolatry. If we need to wait for any nation to repent before God would act, there would be no hope for any people group. If we even had to wait for the professing church to return to him, we might despair. But God will have mercy on whom he will have mercy (Romans 9:15)! Our hope is in the Sovereign God, not in people! Remember this when you gather with others to pray. This was also an act of faithfulness to Elijah. The prophet had said that there would only be rain at his word (see 17:1), and so the Lord sent Elijah to announce the coming of rain. Here is a principle: God will honor those who honor him (cf. 1 Samuel 2:30).

Let us thank God for the godly who still remain in the nations of the world! Every follower of Christ is a witness to the power of God’s saving grace! If God could save you, my friends, he can save anyone. The salvation of the righteous comes from the LORD… (Psalm 37:39 NIV). Let us pray fervently for God to send a new great awakening. Greed, self-love and sexual immorality bind the wills of people. They will not come to him and have life (John 5:40). But King Jesus is able to break those chains, for he is the Great God and Savior! Now is the time to seek the Lord! 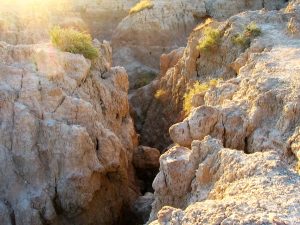 We again look at a small family, who left the Promised Land of God’s old covenant people to seek an easier life. It wasn’t a far departure, but it was unnecessary and away from the people and worship of the true and living God. (Remember that under the old covenant, worship of God was closely connected with the place God had chosen for the tabernacle or temple.) What happened to that family?

First, Elimelech died. We must be cautious here, because the Holy Spirit does not say that his death was due to being in Moab or because he failed to return to the Promised Land. Physical suffering and death may come for a variety of reasons. You can be living for God’s glory and still suffer or die. But for Naomi, this was a great tragedy, regardless of its cause. For a woman in ancient times, like Naomi, the death of her husband had serious financial consequences. Most women had no job they could fall back on, and there was no insurance or social security or welfare system. A widow basically had three options: to return to her parent’s home (if she could), to beg, or to become a prostitute. In addition, Naomi and her sons are resident aliens, away from family and the people of God. All that Naomi can depend on, in a worldly sense, is support from her two sons.

Second, Mahlon and Kilion married Moabite women, Ruth and Orpah. This is to be expected in the circumstances. Young people tend to make friends and fall in love with available companions of the opposite sex. If there are not godly people available, they will be guided by mere physical and emotional attraction. Marriage to anyone from a Canaanite people group was forbidden by the law (Deuteronomy 7:1-4). Although Moabites were not Canaanites, the Lord restricted them from entering the congregation of his people, even for ten generations (Deuteronomy 23:3-6). Later in the time of Ezra and Nehemiah, intermarriage with Moabites was considered to be a cause of guilt before the Lord (Ezra 9:1-2; Nehemiah 13:1-3). The Lord wanted his people separate from those who worshiped idols.  How much influence Naomi had over her sons at this point is unclear. Please do not blame either parents or children for the choices that the other generation makes! Parents and children are alike responsible to God for their choices. And do not expect God to bail you out of unwise marital choices! For every Ruth, there is also an Orpah. Now Naomi has to deal with the complications of having Moabite daughters-in-law. Seemingly, they got along well, and everything appears to be viable for Naomi.

Third, Naomi’s sons die by the time they had been in Moab for ten years. Again, the text does not say that her sons were being punished for sin. But it is a reminder that death can strike younger adults. Two of my best friends died around the age of thirty. Seek the Lord while you are young! Now Naomi is left without any provision in a foreign country. Picture her grief and fear as she stands beside three graves. Her hopelessness is accentuated in the story by not mentioning her name. In the Hebrew text (cf. ESV, NASV), she is now simply “the woman”; she has lost her family and with it her identity.

What hope was there for Naomi at this point? Was there any? She was living as a resident alien among an ungodly people and without the protection that God and his law covenant provided for the widow. Had this rushing river of tragedy proved that God has abandoned her? Before you rush to give a “spiritual sounding answer”, please stop and feel the horror of her situation! The Bible seems too good to some people, because they fail to read it as a story of real life. However, the story is filled with many stories of suffering and hardship for even the best of believers. Stop and read thoughtfully. Yet, the good news is that God calls wandering people back to him, regardless of the reasons and ways of their wandering. If you feel “alone in Moab” like Naomi, God welcomes you back home through his one and only Son, Jesus Christ. He says, “Come home! Find friendship and joy with me and my people!” This good news can be yours today. Don’t let pride hinder you. Return to the true and living God today.