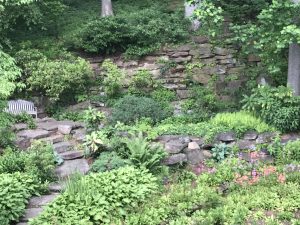 The earth is the Lord’s, and everything in it, the world, and all who live in it; for he founded it on the seas and established it on the waters (Psalm 24:1-2 NIV).

I am in the process of trying out a Bible app on my cellphone. So far, I like it. From the title, you can see that is not my subject. After a month, I have read Genesis and most of Exodus, along with a daily reading from the Psalms. The other day, it was Psalm 24.

As I read this great psalm, I remembered the first time that I can recall hearing that psalm. My cousin Kevin lived in the house next door. Someone invited us to attend Vacation Bible School (VBS) and offered to give us a ride there and back. At this point, you must understand that my family attended a Regular Baptist Church and my cousin’s family attended an Assembly of God. Almost everyone else in our neighborhood was Roman Catholic, and before Vatican II, they weren’t allowed to attend other churches. This VBS was at a Mennonite Church in the next town. Our parents agreed, and we were set for a great adventure.

On a Monday morning, Mr. Miller arrived to pick us up for VBS. When they built a new elementary school up our road a couple years later, he became its principal. “Oh no! I’m riding to school with a teacher!” One day at school, he had to apply “the board of education” to my “seat of learning”. I’m not sure if I confessed my transgression to my parents, because my dad had warned me that any spankings in school would merit a repeat performance at home. But I digress. Anyway, in Mr. Miller’s car, my boisterous cousin and I were prepared for a “cross-cultural religious experience”, because even young boys understood that Mennonites were neither Pentecostal nor Baptist.

At VBS, we did the usual stuff, including a sign-in with cheerful greeters. Here I met my first cross-cultural experience. The women were wearing doilies on their heads! This was definitely not a Baptist church! But I survived the culture shock, and went in for the opening program, which probably involved several children’s songs. But I don’t remember that. I don’t remember the Bible story or even if they had a missionary story, which was a standard part of a Baptist VBS! I don’t even remember the cookies and juice that have been the normal snack in VBSs everywhere since the beginning of time.

I remember two things. One was playing some version of “King of the Mountain” on a small hill outside the church building. I can assure you that Kevin and I enjoyed that, because we loved to wrestle and wreak havoc. I do remember a lady with a doily urging us to memorize Psalm 24, which was the Bible passage for the week. “You need to memorize God’s word.” How many times I was told that as a child! How many times I didn’t listen to that counsel, I can’t count. But somehow, at that country church for a week in the summer, I learned most of Psalm 24.

I still remember it, though I’ve used different Bible translations since the early seventies. The early learning of God’s word stays with you over the years. The Holy Spirit uses the Holy Scriptures to change us, and the memorized word becomes an always near resource. My advice is to memorize Bible verses and passages when you are young. When you’re old, it’s hard to recall where you put your keys, to say nothing of memorizing verses. I’ve been telling our seven-month-old granddaughter verses already. One of them is 1 Corinthians 13:4a; it’s a verse available for all to see as soon as they enter our apartment. Love is patient, love is kind (NIV). Hide God’s word as a treasure in your heart. Think about what Paul wrote to Timothy: And how from infancy you have known the Holy Scriptures, which are able to make you wise for salvation through faith in Christ Jesus (2 Timothy 3:15 NIV). Try to hide a verse of God’s word in your heart this weekend.