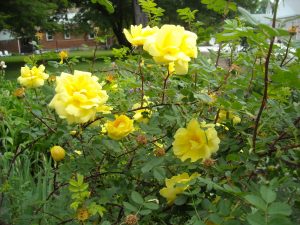 I am usually not a “morning person”; in fact, I’m a slow starter. I usually try to explain this because I was born at 12:29 AM. When I worked third shift in years past, I usually didn’t have any trouble staying awake, except when I had to run machines with strobe lights. But that is a different story. A few years ago, Sharon and I went to Acadia National Park. One of the attractions is to get up early and drive to the top of Cadillac Mountain to watch the sunrise. It is the first place in the continental United States from which you can see the sunrise. When the sun rises, it is a gradual event. This is what happened to Joseph, who had been taken as a slave to Egypt. The first ray of sunshine was being sold to Potiphar, the captain of Pharaoh’s God. In our text for today, we see the sun rise in more strength.

The explanation for this blessing is the fact that the Lord was with Joseph (cf. Acts 7:9). One of the basic facts of God’s nature is his omnipresence. God is everywhere (Psalm 139:7-10; Jeremiah 23:23-24). That is important doctrine, but this verse speaks of the presence of God with his people rather than his omnipresence. When the Bible speaks of God being present or with his people, it means that he has come to them in a special way to bless them, be merciful to them, and to act through them for the benefit of others. It signals that the covenant Lord was about to break into ordinary lives for extraordinary good. In the Scriptures, the Holy Spirit tells us that the Lord was with people like Joshua (Josh 6:27), various judges (Judges 2:18), Samuel (1 Samuel 3:19), David (1 Samuel 18:14), Hezekiah (2 Kings 18:7), and Christ himself (Acts 10:38).

This blessing came in two forms, and neither affected Joseph’s predicament. In other words, God was with Joseph, and Joseph remained a slave. This makes no sense, if you evaluate things from a worldly point of view. I can hear the grumbling, “How can God be with Joseph, while Joseph continues to be a slave?” God, the Lord of time, works gradually in time to carry out his purposes.

First, let’s track Joseph’s rise in the household (39:4). There were steps in his promotion. He became Potiphar’s personal attendant; then he was put in charge of the household; and then in charge of all Potiphar’s possessions. Undoubtedly Joseph did his work wisely and thoroughly. However, the Scripture does not emphasize Joseph’s faithfulness but God’s blessing. It is possible to be faithful in one’s employment or business and yet not advance. There are numerous stories about people that were diligent and made wise decisions, and yet went broke because of other circumstances beyond their control.

Joseph became prosperous or successful (39:2-3). He would have been asked to speak on “How to Be a Successful Servant”, by the “local and regional servant associations in Egypt”. Here we must avoid the trap of reading the Bible through our own colored glasses. A wise Christian does not read the Bible to discover the secret of worldly success, but the path of obedience. God makes certain of his servants successful in order to fulfill his plans not their dreams of pleasure.

Second, blessing accrued to Potiphar because of Joseph (39:5). Again, from Joseph’s immediate, personal predicament, this made no sense. Joseph was doing the suffering as a slave, and Potiphar was becoming rich. If you were Joseph and didn’t know where God’s story was headed, how would you have felt? “If God is with me, why is my boss reaping the benefits? Why doesn’t the Lord set me free if he is with me, rather than using me to bless my ungodly slave-master?” It probably would have been very easy for you to have thought that God wasn’t “fair”. By the way, are there events in your life that you don’t think God has been good to you? If there are, you need to get those complaints settled before the Holy God by your repentance.

There is another lesson in these opening verses of Genesis 39. They could strip Joseph of his richly ornamented robe and remove him from his family, but they could not separate him from his God. The Lord was with him!