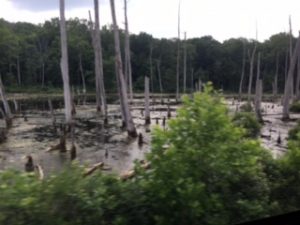 Last time we remarked about the honesty of God’s word. The Holy Spirit does not cover-up the sins of believers. This is far from the course of this world, where political parties hide, cover-up, explain away, and blame shift the sins and errors of their candidates. You will never hear political parties admit, “Yeah, we’re asking you to vote for a deeply flawed person.” But God wants us to see that he graciously works with and through sinful people. Asa is one example. He was loyal to the Lord God his whole life; he didn’t turn from the Lord to false gods. Asa’s heart was fully committed to the Lord all his life (15:17 NIV). Yet in his latter days, Asa refused to listen to God’s Word.

For this reason, God sent a prophet to rebuke Asa for his lack of faith. As we have already observed, there were many sins connected with what Asa did. But Hanani the prophet focused on the crucial point: Asa’s unbelief in God’s power. Unbelief is the epitome of evil, because it worships what is created rather than the Creator. Unbelief also leads to foolishness, since it turns from the faithful God to humanity, which is weak and undependable. Consider the words of Jeremiah. For My people have committed a double evil: They have abandoned Me, the fountain of living water, and dug cisterns for themselves, cracked cisterns that cannot hold water (Jeremiah 2:13 HCSB).

The prophet reminded Asa about God’s previous mercy. He told Asa that he had acted against his own experience of what the Lord could do. Every time we experience an answer to our prayers, it remains as a witness of God’s all-ability to needs yet to come. For example, over many years, I have seen God supply financial needs for various gatherings of Christ’s people. Those local churches experienced this year after year. But at the end of one year would come the cry, “Where will the money come from for the next year?” Why do we do this? What don’t we depend on the Lord? It’s like we want to see God’s provision in hand before we have the need or pray. I have truthfully said, “I don’t know where the money (or whatever the need is) will come from, but I am certain that we can always trust God, who is able to do much more than we ask or imagine” (Ephesians 3:20).

“But see how deceitful our hearts are! We trust in God when we have nothing else to trust to, when needs drives us to him; but, when we have other things to stay on, we are apt to stay too much on them and to lean to our own understanding as long as that has any thing to offer; but a believing confidence will be on God only, when a smiling world courts it most” (Henry).

The prophet told Asa that he had acted against the truth of what God is. God was well aware of what his people needed. The schemes of Baasha were no surprise to him. And God was committed to help his people in their need (cf. Philippians 4:19), when their hearts are committed to him. Asa forgot the truths of God’s sovereignty, omniscience, faithfulness, and mercy to his own hurt. Sound theology is important to a healthy walk with God. The prophet also told Asa that he had acted against his own best interests. Asa had turned from the God of peace; therefore, from that point he will experience trouble.

Tragically, Asa rebelled against God’s message. He did not repent but hardened his heart.

He persecuted God’s prophet. This initiated a course of action in Israel that the Lord Jesus later condemned (Matthew 23:29-39). When we open the doors to sinful ways, we have no idea what the end will be. He oppressed some of the people. In a sinful world, many otherwise innocent people are adversely affected by the sins of leaders. The sinful actions of political leaders of both major parties in our nation are ruining the lives of many people. It is time for God’s people to turn from political hopes to fresh dependence on the living God.