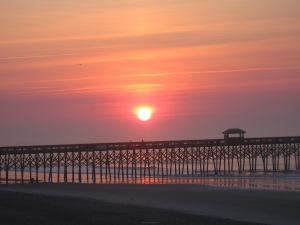 No one saw the Lord Jesus rise from the dead. You will search the Bible in vain for an account of what it looked like when he broke the power of death. The Bible leaves the event itself shrouded in mystery. Yet this does not mean that the resurrection of Jesus is not a historical event, as some so-called “scholars” have claimed. Anything that really happens is historical, whether or not somebody saw it happen. You can have your lights turned on by a timer in your house; that is an event of history, even if you’re not there to see it happen. But you become a witness that they were turned on when you see them on when you arrive home. In the same way, though the Bible does not give us an eyewitness report of our Lord’s resurrection, it does record many testimonies of those who saw him after he rose from the dead. Let us look at an eyewitness report.

Jesus gave many convincing proofs that he truly has risen from the dead (Acts 1:1-2). The apostles were in great need of evidence. They were not expecting to see Christ alive. This is the uniform testimony of the Gospels. No one said, “It’s the third day; let’s go out and look at the empty tomb!” They had problems believing what their eyes saw. Granted, they were startled by his sudden appearance (24:37). However, the text emphasizes that it was more than the surprise of the event. They had doubts about what was happening (24:38; cf. Matthew 28:17; John 20:25). The disciples were not gullible; they were not grasping for the least possible evidence. What they later preached was not the product of wishful thinking. Read the apostles’ viewpoint as stated by Paul (1 Corinthians 15:17, 20).

Jesus met their need. He gave proof of his material existence (24:39). He appealed to their sensual experience – “look, touch, see”. Jesus proved that he was not a ghost or an illusion. The Lord gave proof of his humanity (24:40-43). He was “constructed” like a man. He had “flesh and bones”. He could eat like a human can. The Lord Jesus gave proof of his identity (24:39-40). He really was the same Jesus they had known (John 20:24-28). There is one empty tomb in Palestine today, because Jesus who died and was buried in that tomb has conquered death and is Lord over all. Have you trusted your life to the Lord of life, who showed himself alive with many convincing proofs?

Jesus instructed them in the Scriptures. The Lord is not content to have us live according to our own experience or our own wisdom. People are to live according to the Word of God (Deuteronomy 8:3). What was written in the Scriptures was about Christ and his saving work (24:44, 46). The Scriptures are primarily about the Lord Jesus Christ and what he did, does and will do to save his chosen people. This should ignite our hearts to study and learn the Bible. This past week, there was a discussion on sports talk radio about the need for motivation to win. When a ball team is motivated, they can win games. When Christians become motivated by Jesus Christ, watch out! God is going to do great things through them. This should also guide our interpretation of the Old Testament Scriptures. They are not law-structured or Israel-structured, but Christ-structured.

Therefore, our proclamation of the Bible’s message must be clearly and decidedly evangelical (good news saturated). If we are not proclaiming the Lord Jesus Christ and his saving work, we are not telling the Biblical message. The content of the gospel (good news) must be preached (24:46; cf. 1 Corinthians 15:1-4; Romans 1:1-4,16-17). Repentance (a change of mind) and forgiveness of sins must be preached in Christ’s name (24:47). Notice how these two actions are linked. People must have a change of mind about their sins. (Sin is rejection of God as God, refusal to love God, and rebellion against God and his ways.) Do you see sin as an offense against God? Do you agree with God that sin is wrong? Do you understand that sin ruins people? We are to take the message of Christ and salvation from sin to all nations.

Those who hear need illumination to comprehend (24:45).We are dependent on the Spirit of God for this act of grace (2 Corinthians 3:14). Christians have this (2 Corinthians 3:16). Christ has the power to work directly on the human mind (Acts 16:14). There is one empty tomb in Palestine today, because Jesus who died and was buried in that tomb has conquered death and is Lord over all. Has the Lord of life opened your heart so that you know from the Scriptures that he is risen indeed?

Jesus told them about Pentecost and the new age that was about to begin. The risen Messiah would send the Holy Spirit (24:49). The Spirit would come since Jesus would no longer be physically present with his followers (24:44; cf. John 14:25-27; 16:7). Every follower of Jesus ought to value the preciousness of the gift of the Spirit. All of us are to obey Christ’s orders (24:49). The apostles were to start with a brief period of waiting, and then go out with the message. We are to go and make disciples (Matthew 28:19-20). There is one empty tomb in Palestine today, because Jesus who died and was buried in that tomb has conquered death and is Lord over all. Has the Lord of life given you his Holy Spirit, so that you are able to be his witness? Bow before the Risen Lord, Jesus Christ; trust in him today and have eternal life! Then what should we do? Let’s go and tell others this good news. “Christ is risen! He is risen indeed!”