While he was saying this, a cloud appeared and overshadowed them. They became afraid as they entered the cloud. Then a voice came from the cloud, saying: “This is my Son, the Chosen One; listen to him!” After the voice had spoken, Jesus was found alone. They kept silent, and at that time told no one what they had seen (9:34-36 CSB).

Next, we will consider three truths God the Father affirmed. However, we need to stop for a moment, or we will miss something significant. The previous section spoke of the confession of the apostles that Jesus was the Messiah. Most thinking on that section and the current one has focused on the human responses to Jesus’ words and the event of the Transfiguration. Certainly, our response is important. But it ought not to obscure the action of God the Father in both. There, we saw the Father as the source of spiritual knowledge and faith. Here, we see the Father affirming the Son. So we ought to have a God-focused view of both passages.

Having said that, notice whom the Father spoke about: his Son! The Father stepped into human history to speak in one of those rare moments in the Bible, and when he did, he spoke of his Son and fixed human attention on the Son! The Father receives glory through the Son. As the cloud of divine glory covered them, the Father focused on the Son. Let us learn the mission of the Triune God. Almighty God’s plan is that glory will come to the Father through the Son by the Holy Spirit.

The Father affirmed his Son’s person and calling.

Jesus is God’s unique Son “my Son.” Earlier in Judea, the apostles had heard Jesus assert his relationship to God the Father. Jesus gave them this answer: “Very truly I tell you, the Son can do nothing by himself; he can do only what he sees his Father doing, because whatever the Father does the Son also does. For the Father loves the Son and shows him all he does. Yes, and he will show him even greater works than these, so that you will be amazed. For just as the Father raises the dead and gives them life, even so the Son gives life to whom he is pleased to give it. Moreover, the Father judges no one, but has entrusted all judgment to the Son, that all may honor the Son just as they honor the Father. Whoever does not honor the Son does not honor the Father, who sent him (John 5:19-23 NIV). The Father confirmed what Jesus had claimed about his relationship with God the Father. This confirmation shaped Peter’s world and life view from that point forward. For we did not follow cleverly devised myths when we made known to you the power and coming of our Lord Jesus Christ, but we were eyewitnesses of his majesty. For when he received honor and glory from God the Father, and the voice was borne to him by the Majestic Glory, “This is my beloved Son, with whom I am well pleased,” we ourselves heard this very voice borne from heaven, for we were with him on the holy mountain (2 Peter 1:16-18 ESV). The events of redemptive history are intended to transform how we look at the world and live our lives in it.

Jesus is God’s Chosen One. This is another way the Spirit of God refers to the Messiah, the Anointed One. “Here is my servant, whom I uphold, my chosen one in whom I delight; I will put my Spirit on him, and he will bring justice to the nations” (Isaiah 42:1 NIV). Notice that even the Jewish religious leaders, who were opposed to Jesus, understood Messiah and the Chosen One as equivalent. The crowd watched and the leaders scoffed. “He saved others,” they said, “let him save himself if he is really God’s Messiah, the Chosen One.” (Luke 23:35). The Father in heaven made the link between Jesus as his Servant and his chosen one. What was Christ chosen to be? He was chosen and sent by God to be the Prophet, Priest, and King. He is the final word to people (Hebrews 1:1-2). He is the great high priest (Hebrews 4:14), who offered the final sacrifice for sin. He is King over all (Revelation 19:16).

The appropriate response is to bow in worship Jesus Christ, the Son of God. They were afraid as they entered the cloud of glory. May we have holy reverence for the Messiah. He is God’s Son, and all that we are and hope for depends on his majestic greatness and the surpassing value of what he did for us in the gospel. He is King over humanity during this time of the corona virus pandemic. Put your trust in the Lord Jesus Christ. 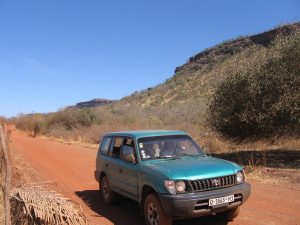 In the Gospel of John, we hear a lot from Jesus about God the Father. (A good place to dive into this subject is chapter five.) Here, Jesus tells of the Father’s activity in tending to the branches that are connected to him, the Vine. The Father has a great interest in the productiveness of his people. But first notice that everything is focused on Jesus Christ. “He cuts off every branch in me that bears no fruit, while every branch that does bear fruit he prunes so that it will be even more fruitful” (John 15:2 NIV1984). The Father is concerned about Christ and his people. He wants Christ’s people to produce fruit for the glory of his Son. For this reason God the Father performs actions on the branches, the people of God.

First, he cuts off every branch that doesn’t bear fruit. (Fruit represents everything godly that comes from a living union and communion with Christ, such as peace, obedience to Jesus’ commands, joy, love for one another, and witness to the world, cf. 14:27; 15:9, 10, 12, 27). Sadly, there are some who have an outward connection to Christ, but who lack a real, vital, organic connection. They do not bear fruit (Matthew 13:18-22; Col 1:23; 1 John 2:19.) The Father acts to remove them from the people of Christ.

Second, the Father prunes every fruit bearing branch. A few years ago, I was pruning the bushes in our backyard. The old, unproductive branches had to be cut off, so that the living branches could increase. A friend of mine was watching as I basically cut off well over half the branches. They looked scrawny. He said, “I hope you know what you’re doing, because there isn’t much left.” I did know, and the bushes thrived, but at that moment in time, it seemed counterproductive. It can seem that way in our lives, when the Father prunes away stuff that needs to go. It is too easy to focus on what is gone, instead of what will grow and bear fruit for the glory of God in Christ.

How is the Father pruning your life now? You should be observing the removal of unproductive stuff from yourself. And you might be shaken and shed tears when you see the pile of discarded ideas, attitudes, and activities. But this is only for your benefit. You do not want to be like discarded branches that bear no fruit. No, you want to be a fruit-bearing branch that becomes increasingly productive. So then, how are you concentrating more on Christ? What new godly interests is the Father developing in you as you draw upon the life-giving power of the ascended Christ?