Now Elijah the Tishbite, from Tishbe in Gilead, said to Ahab, “As the Lord, the God of Israel, lives, whom I serve, there will be neither dew nor rain in the next few years except at my word” (NIV).

We have looked at Israel’s horrible spiritual condition, and the way the Lord responded to it by sending a prophet, Elijah, who would point the people back to God. We have seen that Elijah was fully convinced of the Lord’s existence and power to bring about change. That was a crucial starting point. Two other qualities were necessary for an effective ministry in a very troubled time.

Elijah was conscious of being God’s messenger. He knew his position in God’s work. This helped in two ways:

Elijah knew his authority. He spoke and acted for God, as God’s prophet. He had a mission that the Lord wanted him to do. He was compelled to do it, like Jeremiah was. For whenever I speak, I cry out, I shout, “Violence and destruction!” For the word of the Lord has become for me a reproach and derision all day long. If I say, “I will not mention him, or speak any more in his name,” there is in my heart as it were a burning fire shut up in my bones, and I am weary with holding it in, and I cannot (Jeremiah 20:8-9 ESV). This sense of authority encouraged him to act boldly. He had the courage to personally confront Ahab with his message. He had the courage to announce a great judgment.  Consider how unpopular the doctrine of hell is today, even in supposedly evangelical churches. And not only is the Biblical teaching about hell despised, but also the reality of sin. If you attend a so-called church where sin, condemnation, and God’s wrath are not preached and believed, you are not in a church but a religious social club. Leave it.

Elijah was confident of God’s faithfulness. His confidence was Bible-based. Be careful that you are not enticed to turn aside, serve, and bow in worship to other gods. Then the Lord’s anger will burn against you. He will shut the sky, and there will be no rain; the land will not yield its produce, and you will perish quickly from the good land the Lord is giving you (Deuteronomy (11:16-17 CSB). The world cannot understand the godly man or woman because it does not share its view of God’s word as truth. Elijah did, he took God’s word seriously. He knew that God meant what he said. He also was confident that God would judge sin. Elijah’s prayer to withhold rain and dew from the land must be seen in this light. It had its foundation in the “curses of the law covenant” (cf. Deuteronomy 28:15-68).

For this reason, Elijah prayed in conformity with God’s revealed word. Making requests in true prayer involves having faith to claim the promises in the word of God, and then asking him to do as he has said. This was the motivation behind his fervent prayer (James 5:17.)

Pink in his writings about Elijah made the following three points:

Do we have the same world view that Elijah had? Do we pray like Elijah did? Say what you want, but Christians no longer gather to pray because God is not in control in their world and life view. May we pray together as the early church and the church in times of revival prayed! 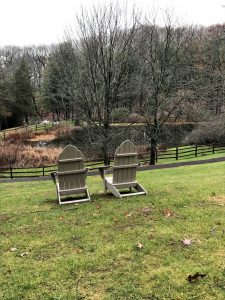 You have tried my heart, you have visited me by night, you have tested me, and you will find nothing; I have purposed that my mouth will not transgress. With regard to the works of man, by the word of your lips I have avoided the ways of the violent. My steps have held fast to your paths; my feet have not slipped (ESV).

One of the basics about the Christian life is that we have fellowship with God; we share our lives with God. Indeed our fellowship is with the Father and with his Son Jesus Christ (1 John 1:3c ESV). The grace of the Lord Jesus Christ and the love of God and the fellowship of the Holy Spirit be with you all (2 Corinthians 13:14 ESV). We know this, yet I think that we don’t do well in actually sharing our lives with the Lord. Perhaps part of the problem is that we don’t know how. Yes, we we’ve been taught how to have devotions, how to pray, how to read the Bible, how to participate in a public worship service, how to witness, and perhaps how to meditate and how to listen to a sermon. I am not for a moment downplaying the importance of such skills. I would only say that praying, reading, and so on should not be mechanical or ritualistic. But that is not the concern of this article.

Let’s think on a larger level than the particulars. Let’s think about sharing our life, because a passion for one area can easily “eat up” the others. For this, we need a model or example. The Spirit has given us one in David, the man after God’s heart. Our text has several ideas about sharing one’s life with God.

One more thing: David wasn’t talking theory. This was his life. He shared life with God among other people who had no desire to do so. He made the daily choices necessary to be with God and to interact with him about his life. Do we?