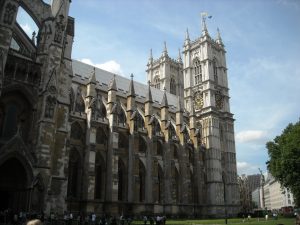 d and is useful for teaching, rebuking, correcting and training in righteousness (2 Timothy 3:16 NIV).

The Reformation (1517-1648) was one of the great awakenings (like Pentecost and the First Great Awakening) in the spread of Christ’s kingdom on the earth. Centered in Northern Europe and Great Britain, the power of the Spirit of God and God’s word brought about a very strong witness to the good news of Christ and salvation. Many were born again from above, and a new way of life began in the regions it touched. It showed the value of human life in the here and now, and multitudes lived for the glory of God, including in the 1600s, North America. Like any matter in which people are involved, the Reformation was far from perfect, but that should not prevent us from rejoicing in the salvation of people and much good that resulted through people who had been brought from darkness into God’s marvelous light. Let us avoid the destructive trap of smashing good things because of a few flaws we perceive. It is right to point out errors, so that we can walk more precisely in the truth. But it is very wrong to reject God’s work because of the remaining sin among his people.

The Bible tells us that God sent his Son, Jesus Christ, at his appointed time: But when the set time had fully come, God sent his Son (Galatians 4:4 NIV). The Reformation also came in this way. The sovereign God prepared the times and the seasons for the quick spread of the good news through people chosen by him. Among the many preparations were the rediscovery of ancient languages (to rightly understand the Bible in its original languages) and the printing press (which enabled the inexpensive publication of the Bible and messages based on the Bible). God used many men to translate his word into the languages of people, so that men and women could hear, read, and meditate on his message to them.

This was an important development, because prior to this the corrupt medieval church had strictly controlled access to the Bible, and its leaders had told people that they could only know truth through the church. This meant that the church told people that the way of salvation was through its sacramental system. However, when people could read the Bible, they discovered that people are saved by grace through faith in the Lord Jesus Christ. When any sinner trusts in the Lord Jesus, he or she is declared right with God. With this in mind, we can appreciate why the first point of Reformation theology is “according to the Scriptures alone”.

In religion, we often see a divided authority. The usual scheme is a holy book, an accumulation of traditions and/or folk practices, and a group of “holy people” that interprets the holy book and the traditions for the adherents of the religion. In practice, this means that the “holy people” are the final authority. This is what happened in the medieval church. It had morphed into a religion that the bishops and priests controlled to keep people paying money in the sacramental system. As long as they controlled the authority structure, they controlled the people. As the Reformers studied the Scriptures, they came to realize that the Bible itself was the written word of God and therefore, our final authority for what we believe and our way of life. The Bible, not the church, declared the way of salvation. Anyone reading the written word of God in a normal manner can clearly understand how to know God and to be right with him, and how to please him.

This first point of Reformation has ongoing value. We do not have to rely on church traditions or her leaders. God wants us to listen to him directly. The practical questions are do we accept the final authority of God’s written word and do we read it carefully, so that we know what God has revealed to us?