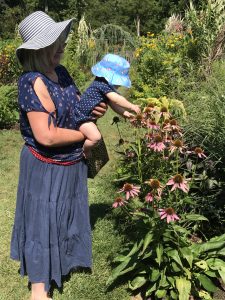 It is remarkable that at the end of his life, Jacob became a prophet. He still had important work to do for the Lord. The latter days of God’s servants can be their best. Moses served the Lord constantly in the last third of his life. Don’t moan your way to glory. Trust God for grace and strength to glorify and to serve him until your last day.

In our text, we first see some common matters of life. When Israel saw the sons of Joseph, he asked, “Who are these?” “They are the sons God has given me here,” Joseph said to his father. Then Israel said, “Bring them to me so I may bless them.” Now Israel’s eyes were failing because of old age, and he could hardly see. So Joseph brought his sons close to him, and his father kissed them and embraced them. Israel said to Joseph, “I never expected to see your face again, and now God has allowed me to see your children too.” (Genesis 48:8-11 NIV).

Jacob was blind because of his age. It is a weakness of our fallen race (Ecclesiastes 12:3). Everyone who lives by sight rather than by faith will eventually lose their guide. Old age has burdens along with its blessings. You can’t have one without the other. But you can rejoice in what the Lord does in your weakness (cf. Romans 8:26; 2 Corinthians 4:16-17). The eye of faith may be clear when the eye of the flesh is very cloudy. You can see the kingdom of God when you can’t see the kingdoms of this world. By faith like Abraham, look for the city that has foundations (Hebrews 11:10). This we ought to do, rather than groan about the weakness of our failing bodies.

Jacob was affectionate toward his grandsons. He thought he would never see Joseph again, but he had the joy of seeing Joseph’s sons. Older people often have a special affection for their grandchildren, perhaps even more than they had toward their children. Grandchildren are the crown of the aged, and the glory of children is their fathers (Proverbs 17:6 ESV). In his providence, God often blesses his people beyond what they might expect. Call to me and I will answer you and tell you great and incomprehensible things you do not know (Jeremiah 33:3 CSB). “God is much better to us than our fears; yea, far better than our hopes” (Spurgeon).

Jacob and Joseph acknowledged God’s providence in their lives. Joseph praised God for the children he gave him. Jacob rejoiced that he could see Joseph and his sons after years of thinking Joseph was dead and sons had never been born to him. Every good thing we enjoy is sweetened when we see that all comes from the hand of a loving Father. Here is the way for the godly to talk. Neither father nor son praised the false goddess Luck, but the true GOD. For what five blessings are you thankful to God right now?