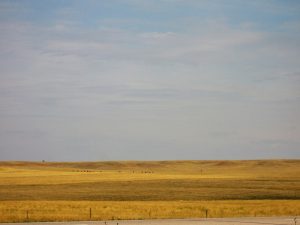 Jacob was human like you and me. He had the same basic needs that we have. He had to face the facts of life like we do. Every human who does not partake of food will eventually die. Jacob had to face that fact. Neither formal prayer nor wishful thinking could change the fact. The famine was severe. He and his family must find food, or they would die.

Jacob was also a believer in the living God. He had received the promises of God (Genesis 28:13-15; 35:11-12). We who know the Lord have also received his precious and very great promises (2 Peter 1:4 ESV). Yet like Jacob we are called to live in times and situations that challenge our faith in God’s promises. So, then Jacob is a good example of the trials of faith that we all must endure. Let’s review Jacob’s situation and then see how he acted as he waited for God’s purpose to be accomplished.

Jacob was in a melancholy predicament (43:1-2). Its source was the continuing famine. Even the best of believers want to be delivered from this kind of trial. In God’s mercy, famine has been unknown in our nation. God has blessed us with an abundance of food, and in most places, water. We ought to give thanks and pray for the continuance of this blessing. Most of us think that an unpleasant course of events will never come, and if one does, it will eventually end. “Better days will come.”  But death by starvation is a hideous prospect (Lamentations 4:1-9). God had decreed seven years of famine. There would be no letup, although Jacob could not know that.

The family came to the end of their food supply. Regardless of their thrift and prudence, the famine was victorious over their resources. In God’s providence, we can easily come to the point where our own resources are exhausted. Jacob, as the head of the family, looked to provide for his own. Leadership is not as glamorous as weak minds imagine. Oh, if life is upbeat, the leader can bask in the applause. But in times of trouble, turmoil, and tragedy, everyone blames the leader.

The father and his sons had a serious confrontation (43:3-10). Judah reminded his father of the full nature of their problem. He reminded Jacob of the conditional permission he and his brothers had to return to Egypt (43:3-5). They could only see the governor’s face if Benjamin was with them. (By the way, this illustrates that we can only approach God the Father through His Son.) The other nine sons would not hazard their lives unless Benjamin could go with them. In this way, Jacob had locked himself into a position where he would have to eat his own words (cf. 42:38).

People often do not speak rationally during an emotional discussion. Jacob blamed his sons (43:6) for the apparent loss of another son, Simeon. They attempted to clear themselves of blame (43:7). They might well have gone back and forth on this issue for a long time. People can require outside mediation to break a blame and defense cycle.

At this point, we can pause to consider a horrible truth. People do not automatically accept wisdom, especially God’s wisdom. Sin, which rejects God and his authority, will fight even the wisest and most tender plans for change. Many families have desperately tried “interventions” with little success. The one needing help fights wisdom. It is what sin does. Wise counsel is one of God’s means for help. However, grace from the Spirit with the wisdom is the only way of real, lasting change.