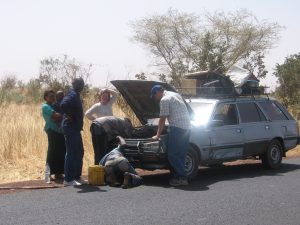 We live in a world of troubles. As painful as it might be, think with me on this theme for a few moments. People suffer from fire, flood, storms and tropical storms, drought, landslides, earthquakes, and occasionally volcanic eruptions. Some people live in anguish because of disease or serious disabilities. Others find their lives in turmoil because of wars, terrorism, civil unrest like riots and looting, economic recessions, oppression by tyrants, or religious persecution. And still others suffer spiritually and emotionally through guilt, depression, betrayal, loneliness, anger, abuse, fear and disappointments. No one is exempt from affliction—no one.

The Bible talks much about afflicted people. “If you were to take out of the Scriptures all the stories that have to do with poor, afflicted men and women, what a very small book the Bible would become, especially if together with the stories you removed all the psalms of the sorrowful, all the promises for the distressed, and all the passages which belong to the children of grief! This Book, indeed, for the most part is made up of the annals of the poor and despised” (Spurgeon, Metropolitan Tabernacle Pulpit, Vol. 32, p. 301). Think about how much of the Bible talks about a young man sold as a slave who suffers in prison in Egypt. And what of that baby boy, left to die in the river, and yet whose life is spared, only to lose forty years of his life in the wilderness, and then who spends most of his next forty listening to the bitter complaints of an ungrateful people. We read many chapters of a man who loses all his children and property, and then suffers from a dreadful disease, only to have his best friends accuse him unmercifully of being wicked. The Bible tells us of two widows, suffering in poverty and uncertain of their future. And have you read of a despised boy, left out in the fields to tend sheep? He becomes a hero, but then runs for his life for years, while having to care for other oppressed people. And we haven’t even begun to talk about a prophet whose only food came from ravens and a destitute widow, about women who longed for children, but who for long years were childless, or about a homeless teacher, who was mocked and eventually killed by those who hated him. And these are those favored by the God of heaven! Yes, it seems to me the Bible is a book for afflicted people and his plan for them. And listen to these words. But God chose the foolish things of the world to shame the wise; God chose the weak things of the world to shame the strong. He chose the lowly things of this world and the despised things—and the things that are not—to nullify the things that are, so that no one may boast before him (1 Corinthians 1:27-29 NIV).

Yes, God cares about the afflicted, and he invites us to draw very near to him in our suffering. He is so desirous of our approach that in his word, he even gives us the words to say to him in our anguish of heart. Let us, therefore, listen to this prayer with an understanding of God’s great compassion for us.

In this song, we hear an intensely personal approach to God. The psalmist David had meditated upon his friendship with God; now he acted upon it. We must know how to interact with God as his friend. David referred to himself some seventeen times in these verses! Notice the first-person pronouns I, me and my. After exalting God in worship, he boldly spoke as a friend in need. He or she who worships well can fellowship well. David expected God to be personally interested in his troubles. He was not of the opinion that we must only pray for God’s concerns or the needs of others. But having put God first, David was not ashamed to present his neediness to God. He knew that in this unequal friendship, he could depend upon God’s real awareness of and deep compassion for him. If this doesn’t convince you, meditate on Christ’s revelation of God’s compassion (cf. Matthew 9:36).

David used two pleas to persuade God to act for his benefit. He pleaded his trust in God (25:20-21). Notice the phrase “in you” (cf. 25:2-3, 5). Faith is a God-focused activity. It is consciously relying on the all-powerful God to be directly and personally involved in one’s life. It is looking out of oneself to God. He pleaded his miserable condition (25:16-18). Notice the words he piles up in this appeal: “lonely… afflicted… troubles… anguish… affliction… distress.”  But notice what David understood. He knew that he did not need to instruct God about what to do for him. He only wanted God to “look upon my affliction” and he was confident of help. Why is this enough? He knew the character of the God that he relied on (cf. Exodus 3:5-8).