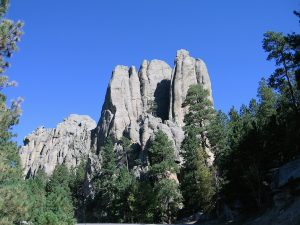 On part of our recent trip, we traveled through Cleveland a couple times. In the process of finding our way through the city, we had to pay attention to the directions from Google Maps. (Yes, I lived in Cleveland, but I was a toddler, and a lot has changed since then.) When we pay attention to the fine points, it is easy to miss the big picture of a city in celebration of a championship – at least until you talk to the locals. This also happens when we read sections of the Bible that tells God’s story of glory in Jesus Christ. We get involved in what’s happening in the current part of the story, and so miss important points that the living God wants us to think about and live accordingly.

Here it is easy to see that Ruth replied respectfully to Boaz’s generosity (2:10). We can notice her humility before Boaz. His kindness surprised Ruth. Her life had suddenly taken a change for the better! She expressed her gratitude in her posture. She probably dropped to her knees and then put her face to the ground. She demonstrated her neediness and dependence on his goodness.

We should see more. Ruth was amazed about his grace. We must remember the times in which Ruth and Boaz lived. It was the time of the Judges, and Israel had many spiritual problems

On a purely human level, she had to wonder about the reasons that a rich, influential man like Boaz would notice a poor widow like Ruth. In addition, why would a godly man of Israel care about a foreigner, especially a woman from Moab, when Israelites could be expected to avoid them? We need to know the larger picture. Near their lifetime, the following happened in Israel. Again the Israelites did evil in the eyes of the Lord. They served the Baals and the Ashtoreths, and the gods of Aram, the gods of Sidon, the gods of Moab, the gods of the Ammonites and the gods of the Philistines. (Judges 10:6 NIV) To a godly man living under the law covenant, a Moabite woman had danger written all over her. Later on when the Proverbs were written, the idea of a foreign woman continued to have rather negative connotations. This is the part of the story we must not miss. Though Boaz would have been aware of all this, he still extended grace to her. In the same way, though we come from a people who have committed the evil exchange (Romans 1:18-25), the Lord Jesus has also reached out to us in amazing grace. Ruth understood that Boaz’ kindness came from grace—unmerited favor, and she appreciated it highly! Do you have a sense of amazement about Christ’s grace to you? Today is the day to regain it in your heart.

Boaz explained his kindness to her (2:11-12). He was aware of her sacrificial giving. He knew what she had done for Naomi, after the death of her husband. Thus, he plainly is referring to how Ruth helped Naomi return to Bethlehem. The news about Naomi’s return would have spread quickly through such a small town in ancient times when people had a much greater sense of community. He appreciated what this had cost her. She had left family and what is familiar to become a foreigner in Israel, where the law covenant would provide barriers to her acceptance. She had imitated Abraham, who had left Ur (Gen 11:28; 24:7) to follow the promise of God, and so she shows that she had the character of a daughter of Abraham. She had come to live among an unfamiliar people, and so she probably was friendless, which is sad. We all need to be more like Boaz and realize what hardships people are experiencing. The day for the proverbially oblivious male is past. Wake up and care, in order to show Christ’s kindness.

Boaz prayed for Ruth. He asked the Lord to reward her. “The Lord” or Yahweh is God’s covenant name with Israel (cf. Exodus 6:2). He believed that his covenant Lord would be able to repay Ruth for her kindnesses to Naomi. His prayer for reward is within the context of faith (Hebrews 11:6). The Lord motivates us to believe him by promising great rewards for those who do. Things like eternal life, forgiveness of sin and justification, a place in God’s family, and an eternal inheritance seem like good motivational rewards, would you agree? Let’s contrast this with what the resurgent atheism of our time offers. The best they can say is, “You are a meaningless nothing in a world of no value; cruelness and kindness are equivalent meaningless ideas; when you die you are just a collection of meaningless atoms slumping back into an inanimate state; there is no hope or good in this meaningless world. Live meaninglessly in despair!” Instead my friends, rejoice in the good news of Jesus! The reward he offers faith in him is so much better!

Boaz acknowledged her faith in God. He viewed Ruth as having taken refuge under God’s “wings”. This is a picture that occurs a few times in the Old Testament Scriptures. We first encounter it in the great Song of Moses, where he speaks of God’s care in delivering Israel from slavery (Deut 32:8-12). From this base, a number of pictures develop from this imagery.

The great idea is that God is the gospel, the good news; God is here, God cares, God rules, and God provides.

Ruth responded with a respectful request (2:13).  By her words she expressed her gratitude for Boaz’s kindness. Ruth needed to say thank you to him. Gratitude is important in God’s perspective. Take time to say “thank you” to the Lord this week. If your small group meets this week, use this special opportunity to share your thankfulness with others. Ruth’s words also asked for continued favor. She knew that her needs were great; she was not ashamed to hint about this to Boaz.

We see also a developed awareness of her need for grace. She took a lowly position, calling herself a “servant girl”, which was someone on the lowest rung of the social ladder. She honored Boaz by referring to him “lord” or “master” (adonai). Ruth had an attitude that is largely lacking in our time. It is called “humility”. What is precious in God’s sight is despised in our land. Don’t put God to the test, thinking that you can get away with pride. Listen to the word of the Lord. Humble yourselves, therefore, under God’s mighty hand, that he may lift you up in due time (1 Peter 5:6 NIV).